A Wild Night in Columbus

As I watched the NHL Draft tonight, and hoped that maybe the Islanders would do something to at least earn a mention on the telecast, I realized a common theme tonight....All of the teams around us keep getting better. 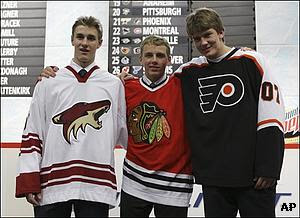 But before I get to that, I might as well recap the first few picks. It began with Pat Kane from the London Knights going first overall to the Chicago Blackhawks. The American was followed by his fellow countryman James van Riemsdyk, a strong power forward who went to the Flyers. This left the door open for Wayne Gretzky's Coyotes to select Kyle Turris, a highly skilled forward. It was the fourth pick, however, that shocked the league. The Kings, who were attempting to trade down in the draft selected Thomas Hickey. This pick was seen as absolutely bizarre as Hickey was ranked at #17 by International Scouting Services and as low as #29 by McKeen's Hockey. Washington rounded out the top five with Karl Alzner, a solid and strong defenseman out of the WHL.

Cherry and Espo: Missed Chances for the Isles?
Two guys who we didn't see in the top five, or the top ten for that matter, were Alexei Cherepanov and Angelo Esposito. The freefalls began with Cherepanov of Russia, who was ranked in the top five by most scouting services and is regarded by some as the most talented player in the draft. The big hazard that came with Cherepanov, however, was the lack of a transfer agreement between the NHL and the Russian Federation. Nobody, however, expected him to drop as far as he did. Like the Brady Quinn of the NHL, "Cherry" fell all the way to the 17th spot where the New York Rangers scooped him up. As and Islander fan this was a heartbreaker. The Rangers nabbed a great prospect that could be a big part of their future. Between van Riemsdyk and Cheraponov, there were already two extremely impressive prospects entering the Atlantic Division. It didn't end there, however, still available was Angelo Espositio, who last year was considered a consensus #1 overall pick. However, Espo will find himself playing with Sidney Crosby, Evgeni Malkin, and Jordan Staal for the Pittsburgh Penguins, who scooped up Espositio with the 20th pick.

What a depressing night to have to sit back and watch. Seeing Esposito and Cherepanov there at #15, which the Isles had traded, was sickening. Also, when it was time for a trade to be announced for the 18th spot, I was nearly positive it would be the Isles after Esposito. I had the feeling that the Isles might trade the rights for Smyth to Calgary if the Isles thought they might not be able to resign him. On the Isles Website, Chris Botta had this to say about the possibility of trading Ryan Smyth rights:

Seems Garth made it clear to one of the Big Market GMs yesterday that he wasn't even considering moving Ryan Smyth's rights to him or anyone else in a trade, a la Hartnell/Timonen to Philadelphia. Now normally I wouldn't be able to share this info, but guess what? Turns out Garth reiterated his stance to every reporter in Columbus yesterday. He even said it to Greg Logan over the phone. Logan has it in today's Newsday.

If the Islanders can't resign Smyth, it's going to be even more heartbreaking now that we could've had either Esposito or Cherpanov with a first rounder.

Looking ahead to tomorrow, things might get interesting for the Islanders. Botta had this to say:

I know absolutely nothing. Seriously. But if the draft starts at 10:00 am tomorrow, I would suggest you don't wait until 11:00 to see how the Islanders did with their first pick in the third round. I repeat: I know nothing. I'm not even at the draft table, Corey is. Simply a hunch.

Remember, the draft isn't on TV for Day 2, so check out the live stream on NHL.com. 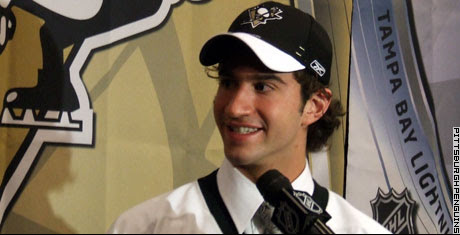