Rarely do we at HNLI start promoting an episode so early in the week, but we feel that this weekend's special event certainly warrants it. HNLI hosts Alex and Steve will host a special roundtable discussion with the guys from Blueshirt Radio. With both Islanders and Rangers fans in the same studio, who knows what might unfold. Among the topics on the agenda will be how free agency unfolded, what both the Islanders and Rangers have done to improve, the outlook for the Atlantic Division this season, and much more. We'll have more updates throughout the week on what to expect this Saturday, so stay tuned to hockeynightonlongisland.com. And mark your calendars: "Blueshirts @ HNLI...Saturday at 3:30 pm EST"
Posted by Alex at 10:46 AM No comments:

Sunday's special Prospects Camp edition of Hockey Night on Long Island featured an eclectic agenda that would entertain any Islanders fan. Among the topics discussed by HNLI hosts Alex and Steve were John Tavares mania, the Prospects Camp thus far, the Islanders' goaltending depth, the 2010 Winter Classic, a very interesting perspective on the Scott Gomez trade, and much more. The episode reached just about every corner of the hockey world and was certainly one that didn't have dull moment. If you missed Sunday's extravaganza, be sure to check out the archive on the show page!
Posted by Alex at 7:10 PM 13 comments:

Be sure to tune into a special Sunday edition of Hockey Night on Long Island at 3:00 PM EST as hosts Alex and Steve discuss everything going on during a very exciting time for Islanders fans. On the agenda will be Sunday's session of Prospects Mini-Camp with commentary and analysis on the beginning of the John Tavares era. Also up for debate will be some of the Islanders' actions (or lack thereof) in the free agent market and much more. Be sure to share your thoughts via phone, IM, or the HNLI chatroom! It's another HNLI that you won't want to miss...Sunday @ 3!
Posted by Alex at 12:31 AM No comments:

JT Day at the Coliseum

While it was far less exciting than the recent Islanders draft party, there was plenty of buzz at the Nassau Coliseum this afternoon as John Tavares was introduced to the media as a New York Islander. In front of a crowd of about 350 fans and a sizable amount of media, Tavares was presented with the #91 sweater. Following introductions from MC Howie Rose, Garth Snow, a several minute tribute video, and the jersey presentation, Tavares spoke about being "excited, thrilled, and humbled to be with the New York Islanders and in this community."

Unfortunately for the fans, however, Tavares faced only a few questions from the media before Tavares and the reporters moved to a private area for the remainder of the press conference. Still, the day seemed to be more about ceremony than hard-nosed journalism.

I hope you all enjoyed the HNLI twitter updates throughout the afternoon and will enjoy the pictures above. Stay Classy, Long Island
Posted by Alex at 9:07 PM No comments:

Be sure to stay tuned to the Hockey Night on Long Island twitter feed for updates and thoughts from the John Tavares Press Conference!

A Slap In The Face: Only One Day of Camp Open 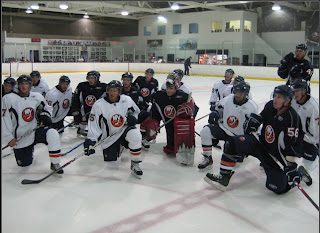 For the past several summers, diehard Islanders fans congregated daily at Islanders Ice Works in Syosset for a week to get a look at the organization's young talent. The openness of Prospects Camp, an event which many Isles fans plan their summers around, has been an example of just how amenable the Islanders have been to its fanbase. Now, however, following the addition of #1 overall pick John Tavares, the Prospects Camp has taken a turn for the worse.

The 2009 installment of Islanders Prospects Camp will be held from Thursday, July 9 to Wednesday, July 15. For the first time in a number of years, however, a majority of this event is closed to the public. In fact, only the events of July 12 will be open to the public. At one of the most exciting times to be an Islanders fan in a number of years, restrictions are suddenly being placed on the fans' access to the team.

The idea of a closed Prospects Camp came as a complete shock. While last year blogs like HNLI were able to provide in-depth daily coverage of the camp's events, the closed camp this year makes for an uninformed fanbase. Not to mention, by closing all but one session of Prospects Camp, the one open session is sure to be an absolute zoo. It is impossible to fathom just how many Isles fans will show up ON A SUNDAY to watch John Tavares lace up for the first time on Long Island. By opening up more of the weekday sessions, the Isles could make for both a more comfortable viewing experience while allowing the team's truest fans complete access to the camp. Instead, a team that prides itself in being a fan-friendly one is leaving its fans in the dark.
Posted by Alex at 3:01 AM No comments:

In possibly the most intriguing storyline of the opening day of NHL Free Agency, Dany Heatley has refused to waive his no-movement clause to go to the Edmonton Oilers despite demanding a trade out of Ottawa. In an extremely unique situation, because Heatley was not traded before 12AM EST Tuesday, the Senators are contractually obligated to pay Heatley a $4 million bonus. Realistically speaking, this could very well increase what the Sens feel they need to compensate losing Heatley and ultimately could ruin any chance Heatley had at getting out of Ottawa.

Clearly, Heatley is not familiar with the old addage that "Beggars can't be choosers." Presumably, Heatley must've been pretty desperate to get out of Ottawa if he had to resort to demanding a trade. So, clearly Heatley shouldn't feel that he is in a position to pick and choose potential destinations. The Senators were much more accommodating than they needed to be in going out of their way to shop Heatley and they managed to find a suitor in Edmonton. Heatley does not have the right to say "I don't like Edmonton, try again." Beggars can't be choosers, and if Heatley really wants to leave Ottawa, he is certainly a beggar.
Posted by Alex at 1:06 AM 1 comment:

1-A Goalie in the Bag: Dwayne Roloson

The Islanders answered a major question heading into the upcoming NHL season by signing goaltender Dwayne Roloson to a 2 year deal worth $5 million. Props to HNLI Guest and Newsday Beat Writer Greg Logan for being the first to break the story.

All in all, a decent signing by Garth Snow. The need for a solid backup goaltender was there with the question marks surrounding Ricky's health, and Roloson is certainly a guy who can step in a perform. Roloson played extremely well for Edmonton last season and posted very good numbers.

Granted, he's 40 years old, but for 2 years and a relatively small cap hit, the age is a non-issue. Roloson has proven to be a true professional throughout his career and he is somebody who will be able to step in and perform if DP gets hurt again.

Keep following HNLI Alex's twitter updates today at twitter.com/hockeynightli or in the blog post below!
Posted by Alex at 2:31 PM No comments:

Be sure to follow Alex's Free Agency thoughts and scoops throughout the day on July 1st! Also, check out the Scott Clemmensen rant in the post below.

No Respect for Clemmensen?

While reading HNLI Guest Chris Botta's UFA Preview on Islanders Point Blank this morning, I was shocked to see the lack of respect for former Devils goaltender Scott Clemmensen.

Scott Clemmensen…really? Besides watching him back-stop the cautious Devils in a pinch for a few months last season on MSG Plus, has anyone really looked at what the 32-year old has done in his career? Give a look and let me know if this is the man for the Islanders.

Clemmensen, who played in only 28 NHL games before his 31st birthday? Clemmensen, who was average-at-best for the Toronto Marlies of the AHL in 2007-08?

Through my work as a hockey photo editor last season, I had the opportunity to watch a ton of New Jersey Devils hockey and a ton of Scott Clemmensen. Despite the fact that Mr. Botta seems to slight his performance last season, there is no denying that Clemmensen is the major reason that the Devils managed to survive their injury plagued season. Mr. Botta points you at Clemmensen's numbers in an effort to knock him, but I say look at his numbers from last sesaon.

Clemmensen was invaluable for the New Jersey Devils and he should definitely be given a serious look by the Islanders. While Marty Brodeur was injured, Clemmer was phenominal. Should Rick Dipietro take his annual fall this season, Clemmensen will be able to step in and keep the Isles firing on all cylinders. Scott Clemmensen was a savior for the New Jersey Devils last year and could be even more valuable as an Islander.

"they are just flat out blessed that they had him, if they didnt their season would be over."