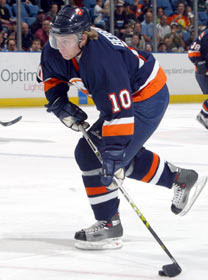 Big news for the Islanders today after an eerily quiet week. The Isles have signed Sean Bergenheim to a contract that is reported to be a one year deal worth about $500,000. In addition, the Newsday report says that it is a one-way contract.

Last summer, the one-way vs. two-way contract controversy was a big sticking point in the stalemate between the Islanders' management and agent Mark Gandler. After a superb year in Sweden in '06-'07, it is clear via the one-way deal that Bergenheim is in the immediate plans of the organization.

All I can say right now is Hallelujah. I had heard that we might have another negotiation issue between Snow and Bergie might occur again this year. I am very glad to see that this all worked out and look forward to seeing how Bergenheim has progressed in his development. Bergenheim is a Ted Nolan type player and should fit in very well with this Islanders squad.

I will leave you with a very promising Bergie quote from the New York Islanders report: "I'm very happy and proud to be an Islander again," Bergenheim said this morning from Finland. "My friends back home know that I consider Long Island my second home. I followed the team a lot last season when I was in Europe and I love our style of play. A lot of people have told me my play should fit in with this year’s team, but Ted Nolan doesn’t know me yet. My goal is to show him I’m a Ted Nolan-type player. I can't wait to get back to Long Island."
Posted by Alex at 5:24 PM