Saturday's episode of Hockey Night on Long Island was another exhilarating segment of hockey talk, ranging from the remainder of the New York Islanders season to a live Soundtigers report by Tom Liodice from Bridgeport. The show also featured plenty of Kyle Okposo talk along with analysis of the backup goaltender situation and the upcoming NHL Draft. With the HNLI chatroom buzzing like usual, Saturday's episode of HNLI was a whole lot of fun for listeners, chatters, and hosts alike. If you happened to miss Saturday's episode, be sure to check out the archives on our show page or search "Hockey Night on Long Island" in the iTunes music store.
Posted by Alex at 11:13 AM 1 comment:

Be sure to listen to the next episode of Hockey Night on Long Island, tomorrow 3/29 at 3:30 PM EST. Alex and Steve will be talking with a special guest about everything that has occurred in Islanders news this week as well as look ahead to the remainder of the season. Also, they will discuss about the upcoming NHL offseason. As always, listeners are invited to call in (718-664-9597) during the show to talk about the Islanders and the NHL, send in IMs (AIM: hockeynightli) and be part of the HNLI chatroom. Remember to listen to HNLI tomorrow at 3:30 PM. To listen, visit http://www.show.hockeynightonlongisland.com/

Update: We just got word that Tom Liodice will be joining us live from Bridgeport at 4:00 to talk about the Soundtigers playoff push. Be sure to listen to HNLI today at 3:30 PM EST.
Posted by HNLI Steve at 10:12 PM No comments:

Be sure to get a weekday does of New York Islanders talk on Wednesday, 3/25 at 8PM EST, when host Alex of Hockey Night on Long Island will make a special guest appearance on the Islesnation.com talk show. Along with Islesnation hosts Tony and Steve, Alex will discuss the latest in Isles hockey.

Be sure to check it out by clicking here
Posted by Alex at 8:06 PM No comments:

Saturday's episode of Hockey Night on Long Island featured special guest Scott Cullen, a well known and widely respected analyst for TSN.ca. In his full one hour interview, Cullen showed exactly why he has had so much success in sports media. Alongside hosts Alex and Steve, Cullen provided insight on everything from the TSN power rankings to Kyle Okposo and the future of the Islanders and even touched on the NCAA Basketball tournament. Other topics included the injury issues of Rick DiPietro, the NHL Playoff race, the 2008 NHL Draft, and of course much more. If you missed any part of Saturday's HNLI, be sure to check out the archives on the show page or search for "Hockey Night on Long Island" in the iTunes music store.

Keep checking back to hockeynightonlongisland.com for all the latest on special guests, episode dates, and Islanders info or subscribe to our email list
(Feedblitz) on the right sidebar.
Posted by Alex at 9:12 PM 2 comments:

Ladies and Gentlemen, Hockey Night on Long Island is ecstatic to announce that this Saturday at 3:30 PM EST, hosts Alex and Steve will be joined by Scott Cullen, on-line producer and hockey writer for TSN.ca. TSN.ca is, of course, one of the best hockey sources on the internet and TSN is the premium sports TV network in Canada. Cullen will provide some insight on both the Islanders' season, as well as the NHL playoffs. Topics on the agenda will of course be the Rick DiPietro injury situation, the debut of Kyle Okposo, and plenty more. As always, HNLI will be taking your calls and IMs and the always-exciting HNLI chatroom will be open for business. So be sure to tune into Hockey Night on Long Island to hear from and even talk to a true big shot in the world of Hockey Media.
SATURDAY 3/22 @ 3:30 PM EST
Posted by Alex at 3:10 PM No comments:

Be sure to tune in to Hockey Night on Long Island this weekend at Special Day and Time: SUNDAY @ 3:30 PM EST. With Steve on the bench this weekend, Alex will be manning the studio along with a special guest co-host to discuss the latest Islanders collapse, look ahead to the offseason, and talk about calling up the youth. All of this plus phone calls, IMs, and the HNLI chatroom will be ready to go on Sunday at 3:30 PM EST! Don't Miss It!
Posted by Alex at 8:50 AM No comments:

Saturday's Episode of Hockey Night on Long Island was another hour of pure in depth Islanders talk, focused around the Isles' push for a playoff spot. Joined by Tom Mascioli of islesinfo.com, hosts Alex and Steve discussed everything from the Dubie decision, to the abysmal powerplay, and even touched a bit on the upcoming offseason. Even after Saturday night's loss, the episode is still an enjoyable one to listen to, so be sure to check out the archives on the show page or search "Hockey Night on Long Island in the iTunes Music Store.

IMPORTANT NOTE: THIS WEEKEND'S EPISODE OF HNLI WILL BE ON SUNDAY, MARCH 16 AT 3:30 PM EST. WE APOLOGIZE FOR THIS WEEKEND'S CHANGE OF DAY AND HOPE THAT YOU'LL STILL TUNE IN ON SUNDAY!
Posted by Alex at 4:04 PM No comments:

HNLI Prior to Crucial Game Saturday 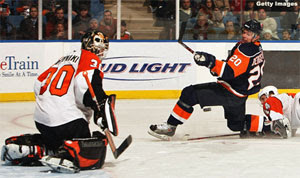 TUNE IN: Saturday 3/8 3:30 PM EST
With under 15 games remaining in the NHL Season and the Islanders 5 points out of the playoffs, this Saturday's matchup against the Philadelphia Flyers is without a doubt the most crucial game yet. A win can propel the Isles back into the hunt, while a loss would all but squander any shot at the playoffs. Be sure to tune into Hockey Night on Long Island this Saturday at 3:30 PM EST, just a few short hours before the game, for an hour of nonstop Isles talk. Hosts Alex and Steve will have the phone lines open, like always, encouraging you the listeners to call in and have your opinions heard. In addition, the HNLI chatroom will be open for extra banter. Along with the big matchup against Philly on Saturday, the guys will discuss the home-and-home series with the Rangers, analyze Ted Nolan's decision to start Wade Dubielewicz over Rick DiPietro on Thursday, the entire Eastern Conference playoff picture, and much more. So, before the most important game of the year, be sure to tune in for the most important episode of the year on Hockey Night on Long Island....your source for everything New York Islanders.
TUNE IN: Saturday 3/8 3:30 PM EST
Posted by Alex at 3:43 PM No comments: 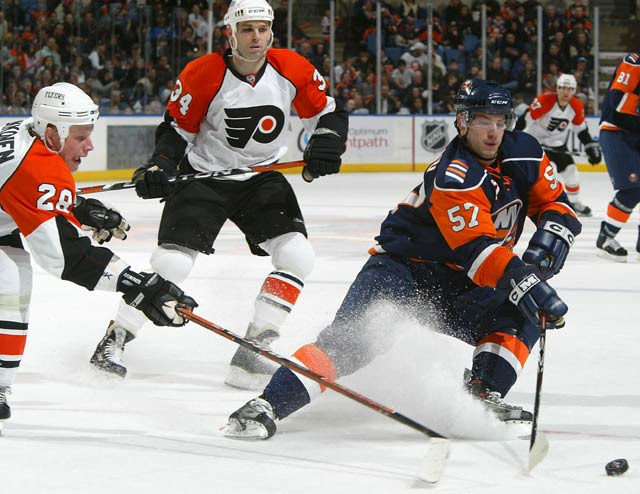 For the second straight weekend, the Islanders lost their Saturday afternoon game leaving Hockey Night on Long Island with a cloud hanging over the post-game episodes. Nonetheless, Saturday's episode, which followed the 4-1 loss against Philadelphia, was another entertaining hour of New York Islanders talk. Steve, who was holding down the fort in studio, was joined by co-host Alex on location at the Nassau Coliseum and Bill from New York Islanders Fan Central. The trio discussed the effects of the Marc-Andre Bergeron Trade, Miroslav Satan on the Powerplay, the Core of the Four, the recent play of Rick DiPietro, and much more. For the first time in a long time the phones wouldn't stop ringing, making for an awesome episode with some great listener interaction. Saturday's episode was truly a lot of fun for both the hosts and the listeners despite the loss that preceeded it. If you missed any of Saturday's HNLI, be sure to check out the archives at our show page or search "Hockey Night on Long Island" in the iTunes store to subscribe to the podcast. Thanks for Listening and LETS GO ISLANDERS!
Posted by Alex at 11:07 AM No comments: