Another Post-Game Saturday on Core Weekend 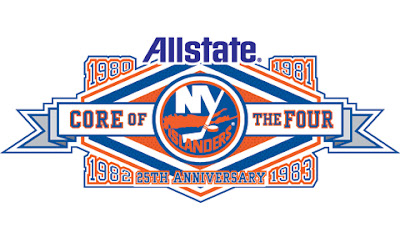 With two big games on Saturday and Sunday with playoff race implications, plus the Core of the Four weekend to honor the Four Islanders Stanley Cup teams of the glory days, it is sure to be one momentous weekend for Isles fans. Be sure to make Hockey Night on Long Island a part of this very exciting weekend by tuning into to a special post game episode on Saturday at a SPECIAL TIME, 4:30PM EST. The episode will immediately follow Saturday's matinee against the Philadelphia Flyers. Steve will be holding down the fort in the studio, while Alex will join in live from the Coliseum to talk about everything from the playoff race, to the trade deadline, the Core of the Four, and of course to recap Saturday's game and preview Sunday's. The guys will also be joined by Bill of the New York Islanders Fan Central to provide some more insight on all the buzz in Islander Country. Listeners like always can add to that buzz by calling, IMing, or joining the ever-chatty HNLI chatroom. So be sure to tune in this Saturday at 4:30 PM EST for what should be an awesome part of a phenomenal weekend.
Posted by Alex at 7:44 PM No comments:

Be sure to check back to hockeynightonlongisland.com for in depth opinion on the trade deadline for the Islanders and around the league.
Posted by Alex at 5:06 PM No comments:

Despite following the Isles' 4-2 loss to the Devils, Saturday's episode of Hockey Night on Long Island was another very eventful and action-packed hour of hockey talk. Aside from recapping the afternoon's on-ice happenings, hosts Alex and Steve were joined by Gary Harding of the New York Hockey Report and the NYI Booster Club to discuss the Eastern Conference Playoff Race, the recent winning streak, Trent Hunter's contract extension, the NHL trade deadline, and so much more. There's no doubt that if you missed Saturday's episode that you have some catching up to do. So, be sure to check out our show page for the archives of this and every episode, or subscribe to the podcast via iTunes by searching "Hockey Night on Long Island" in the iTunes Music Store. Be sure to keep checking hockeynightonlongisland.com this week or subscribe to our email list for the latest Isles info, trade deadline analysis, and info on upcoming episodes and guests. Keep listening and LETS GO ISLANDERS!
Posted by Alex at 6:25 PM No comments:

Be sure to tune in for this Saturday's episode of Hockey Night on Long Island. Hosts Alex and Steve will be joined right after the Isles' afternoon contest against the New Jersey Devils by Gary Harding of the New York Hockey Report and the NYI Booster Club. Along with in depth discussion of the matinee game, the guys will discuss the return of Chris Simon, the latest winning streak, and the buy/sell dilemma of the upcoming trade deadline. Like usual, the trio will take your calls and IMs so you can throw your two cents into the mix. You can also join the banter in the HNLI chatroom. So be sure to tune into HNLI postgame on Saturday at 3:30 PM EST. To listen, click here:

There is an old expression that says "Don't fix what isn't broken". For the Islanders, it seems as though the team is the farthest thing from broken as of late. Despite an incredible number of injuries, the Isles have won five straight games. So, it would seem that there is no need for change.

According to Greg Logan's latest blog entry, Chris Simon will be returning to the Islanders' lineup tonight after the longest suspension in NHL history (topping the record previously held by none other than Chris Simon). On the other end of this return is Jeff Tambellini, who will be sent back to Bridgeport to make room for Simon. Tambellini had previously been playing with the "Kid Line" along with former Bridgeport teammates Frans Nielsen and Blake Comeau. It was this line that provided the energy that pulled the Isles out of their 7 game skid and put the team back on track.

Now, however, Ted Nolan insists on ripping that line apart to bring back longtime friend Chris Simon. There is no doubt in my mind that this move will prove to be a destructive one for the Isles. Chris Simon is not only a nuisance when it comes to discipline, but is also a detriment to the team hockey-wise too. Between his two massive suspensions, Chris Simon had done absolutely nothing positive for this team. He further proved to me that he is too slow and sluggish to keep up and is past the prime of his career. By inserting him into the spot that Tambellini occupied, Nolan is jeopardizing any chance that the Isles have at making a run for the playoffs.
Posted by Alex at 5:08 PM No comments:

First of all, sorry to all for the slight delay on this recap of Saturday's episode of Hockey Night on Long Island. It was quite the extravaganza on HNLI, as hosts Alex and Steve were joined by long-time guests Tom Mascioli and Tom Liodice. Mascioli of islesinfo.com joined the guys to talk everything Islanders from the recent string of injuries to the recent win streak. Tom Liodice of The Tiger Track joined in live from Bridgeport with an update on the Islanders' farm team and blue chip prospect Kyle Okposo. The team of Toms made for a very entertaining hour of hockey talk for everyone. If you missed Saturday's episode of HNLI be sure to check out the archived version at our show page or subscribe by searching "Hockey Night on Long Island" in the iTunes store. Check back to hockeynightonlongisland.com for a preview of this upcoming Saturday's episode and much more! Keep tuning in and LETS GO ISLANDERS!
Posted by Alex at 8:28 PM No comments:

Be sure to tune in this Saturday at 3:30 PM EST for another episode of Hockey Night on Long Island with hosts Alex and Steve. The guys will discuss the Isles' latest turnaround after the notorious losing streak, discuss the upcoming trade deadline, make projections, and much more! In addition Alex and Steve will be joined by a special guest TBD. HNLI will, like always, take your calls, IMs, and host the HNLI live chatroom, which has been buzzing as of late. So, be sure to tune in for a can't miss episode of HNLI, this Saturday at 3:30 PM EST. To listen, click here:

Update: The special guest for tomorrow's episode will be Tom Mascioli of Islesinfo.com.

Saturday's episode of Hockey Night on Long Island was another awesome hour of New York Islanders talk, which was a blast despite the team's play as of late. Hosts Alex and Steve were joined by Michael Schuerlein of islesblogger.com and discussed plenty of Isles hockey topics, but were also surprised by an appearance by 7th Man Award winner Roger from North Carolina, who was named the NHL's most passionate fan in 2003. Roger, an advocate supporter of the LI Lighthouse plan, sparked some great discussion about the plan to spruce up the coliseum and the surrounding area and told listeners how they could help in the effort to get things going. You can check out his website at lilighthouse.com. With both a scheduled and surprise guest, along with the most active HNLI chatroom ever, Saturday's episode of HNLI was truly one for the ages. If you missed it, be sure to check out our show page for the archived edition download, listen in the player below, or subscribe to the podcast by searching "Hockey Night on Long Island" in the iTunes store. The next episode will be Saturday, February 16 at 3:30 PM EST. Until then, keep checking back to hockeynightonlongisland.com for updates on guests and Isles news.

Be sure to tune in to Saturday's episode of Hockey Night on Long Island. Along with special guest Michael Schuerlein of islesblogger.com, we'll discuss the team's latest woes and talk about how the Isles might turn it around or if the season has reached a point past revival. It'll be an awesome episode with calls, IMS, and of course the open forum of the HNLI chatroom. So be sure to tune in for a great episode tomorrow, 2/9, at 3:30 PM EST. To listen, visit www.show.hockeynightonlongisland.com or click on this button:

Many topics were discussed on last week's episode of Hockey Night on Long Island. Unfortunately, Alex was unable to attend the episode due to prior obligations. However, Ken Rosenblatt of the Islanders Outsider Blog and a member of the NYI Blog Box filled in nicely as a guest co-host. We started off with a post-game recap of the Isles afternoon lose against the Canadiens. Also, we spoke about the NHL All-Star Game, including Rick DiPietro's play in the first period, the media coverage, and the Superskills competition. Then, Tom Liodice of The Tiger Track Blog and a member of the NYI Blog Box joined us and we spoke with him about the Bridgeport Soundtigers, possible call-ups the Isles would make (which ended up being Jeff Tambellini, Frans Nielsen and Kip Brennan/Jeremy Colliton), an update on Kyle Okposo and little bit more New York Islanders hockey. As always, the HNLI Chatroom was very active and listeners called in. To listen to the archive of this episode, you can use the media player below, click here

or search "Hockey Night on Long Island" in the iTunes Music Store.

Posted by HNLI Steve at 8:11 PM No comments: