Alex and Steve are pleased to announce the inaugural season of Hockey Night on Long Island fantasy hockey. We are hoping to put together a competitive fantasy league with some of our listeners and guests. There is no money involved as this is just for pride and bragging rights. So, please join the league and stay tuned for draft information and such. Here's the league info:

Season 3 Opens With a Bang

Saturday's Season Premiere of Hockey Night on Long Island was a spectacular way to get ready for hockey season. The episode featured special guest Scott Cullen of TSN.ca who provided some great insight into the upcoming Islanders season. Cullen spoke about new head coach Scott Gordon, the importance of Rick DiPietro, the several holes that the Isles need to fill, and of course the youth movement which will be a focal point for the Islanders this season. Cullen also took calls from listeners and gave his league-wide predictions and teams to beat. In his second HNLI appearance, Scott Cullen was once again phenomenal to talk to.

Hosts Alex and Steve also had their fair share of banter with even more callers and plenty of Isles talk. The guys covered DiPietro's fragility and workload, the battle for spots on defense, and much more. So if you missed Saturday's Season Prmiere of HNLI, be sure to check out the archive by heading over to our show page or by subscribing to the podcast by searching "Hockey Night on Long Island" in the iTunes store. Also stay tuned to hockeynightonlongisland.com for HNLI's upcoming schedule.
Posted by Alex at 12:14 PM No comments:

Season Premiere This Saturday with SCOTT CULLEN of TSN! 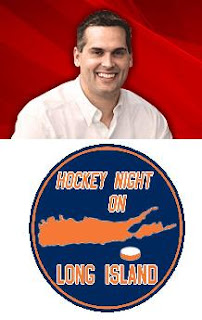 Ladies and Gentlemen....it's time for the start of Hockey Night on Long Islands third season! This Saturday, September 27, @ 3:30 PM EST, hosts Alex and Steve will return to the air to begin coverage of the 2008-2009 New York Islanders season. The dynamic duo will bring you the latest from Islander Training Camp, update you on preseason happenings, and preview what is in store for the Isles this year. Joining the guys for a special guest appearance and interview is Scott Cullen of TSN.ca. Scott, who is one of Canada’s top sports writers, will have the latest on the upcoming Islanders and NHL season. Scott will also take your questions and be a part of the banter. HNLI lets you get into the action via telephone, instant message, and the Official HNLI Chatroom. So, get ready for the beginning of an awesome season of Islanders hockey and the start of Season 3 of Hockey Night on Long Island....this Saturday at 3:30 PM EST!