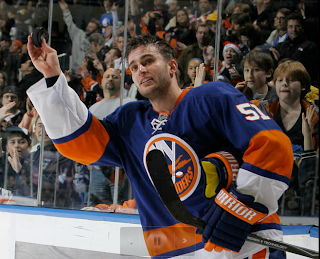 The Scoop: Kicking off a three week stretch at home (with 2 games at MSG thrown in there), the Islanders won Saturday in overtime by a score of 3-2 over the Boston Bruins. Frans Neilsen scored the game winning goal on a breakaway after a feed in transition by Blake Comeau. Also of note, Rob Schremp scored his first NHL goal on the powerplay in the first period to open the scoring.

Our Take: What a huge win for the Islanders to kick off their "most crucial stretch of the season". While the team was horribly outshot in the third period, the Isles looked very good in the first two frames and in the overtime. Obviously that's not a model on how to win games, but clearly the team has some confidence and momentum after a big win at home. Also, it's important to note that the Isles managed to score an even strength goal for the first time in 3+ games. Also, it's the first time in 3+ games that somebody other than John Tavares has put the puck in the net. There were definitely some big positives last night and now the Islanders have a chance to take advantage of a mediocre Florida Panthers team and then play two games against the struggling Rangers. Last night's victory makes it very possible for the Isles to get just the start they need for this crucial stretch.

The Scoop: Chris Botta of Islanders Point Blank Reports that the Islanders will be making their retro, royal blue jerseys their primary jerseys next season. The team is in the process of designing a matching white version to be the team's road jersey.

Our Take: This was certainly long overdue. There has been a movement among Isles fans since the team held retro night and the Isles once again sported the royal blue. There is no doubt that in many ways the Isles missed the mark with their current uniform design and it is definitely the right move to switch (back) to the beautiful royal blue.