For JT, PPGs Come in Pairs 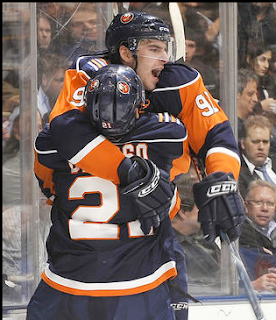 Despite coming out on the short end of their last two contests, it appears that the Isles have figured out how to use John Tavares to his fullest potential on the powerplay. Both Tuesday's contest in Philadelphia and Wednesday's contest in Toronto featured John Tavares potting a pair of goals on the man advantage. It's incredibly striking just how similar the four goals are. In all four situations, Tavares had himself positioned on the back post. Tuesday, it was Tavares hammering home rebounds from point blank range, while Wednesday night it was burying a pass from just outside the crease. Check it out:

As I wrote yesterday, the Isles return home Saturday for their most important stretch of the season. While clearly the Islanders need a lot to change for this home stand to be a successful one, hopefully JT can keep the powerplay magic alive.
Posted by Alex at 3:51 AM