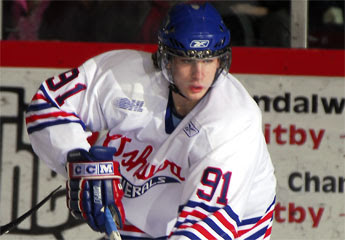 I was absolutely disgusted to wake up this morning to a column by Steve Simmons in the Toronto Sun that calls for John Tavares to "pull a John Elway, an Eli Manning or an Eric Lindros. And find a way to get out of playing for the Islanders."

Click here to read the article yourself before I rant.....

Now, whether you are an Islanders fan or just a sports fan, this is absolute garbage. For a writer to suggest that a top prospect look for a way to get out of being drafted by the team that rightfully deserves him is ridiculous on so many different levels. The fact that players are able to wiggle out of playing for a certain team is a major problem in sports and it is certainly not a move that should be encouraged by a columnist (despite where his rooting interests may lie).

But let me placate Mr. Simmons and answer a question posed in his article...

If you think about it, why would anyone with dreams and aspirations of greatness want to play for the Isles?

But dreams and aspirations aside, should a player simply be able to weasel his way out of playing for the team that wins the lottery? Reality has shown us, of course, that this is in fact possible. But no one with any sense of integrity could possibly consider refusing to play for the team that drafts them. It is an honor to be drafted into the National Hockey League and nobody is above that honor to the point where they can say that they'd rather play for somebody else.

New Yorkers, of course, have been on the other side of this debate with the Eli Manning situation. Giants fans were obviously thrilled to be able to steal Eli from the Chargers, whom he and his daddy both refused to be associated with. Of course, for the Giants it worked out great. But I knew at that moment, that I would never have the same respect for Eli Manning. Both Eli and his daddy thought that they were too good for San Diego. But to me that really says that they weren't good enough to take on the challenge of turning that franchise around. The Chargers wound up with a kid named Philip Rivers who has been one heck of a quarterback and has elevated the team to a level that they had failed to reach for years. While a Superbowl may still be a few years off for Rivers, I know that I will personally be applauding when the Chargers, led by Philip Rivers, are able to hoist that trophy.

Now, hopefully that will not be the case with John Tavares and the New York Islanders. I personally don't expect Tavares to pull a Manning, but rather that Simmons' article is just a stunt to draw a few more readers up in Leaf Town. Either way, it is despicable for any player to refuse to join the team that draft's them and it is even more disgusting to see this type of action proposed by a columnist.

Opinions? Thoughts? Sound off in the comments section! 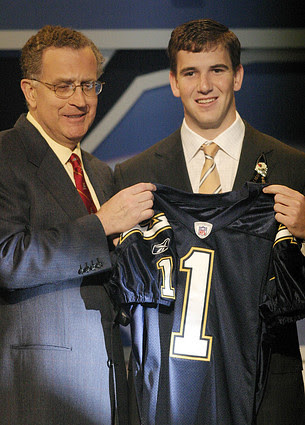 I read Mr. Simmons article as well and I couldn't agree with you more.

Very good read...unfortunately I am in the majority that was happy when Manning came to NY (even though I'm a Jet fan) but I do see your point. You should be thrilled to join a Professional sports team and if you are the NO 1 pick you should be even more honored that you are chosen to turn a wayward franchise around.

Keep up the Good Work
--bill

Weasel columnists like Simmons -- who has done this paint-by-numbers mail-in column countless times before -- seem to exist only to stir up tripe and elicit fan rage.

So he succeeded at the easy part of that game, but your thoughtful response puts his kind of junk to shame.

Great Post. Of course, from a selfish point of view, I want to see Tavares come to the Islanders. He might possibly give us the spark we need to be contenders again.

The whole idea of draft picks being able to choose where they go is absurd. Can you imagine the chaos and pandemonium it would cause if just ten percent of these new players could pick and choose where they want to or don't want to go. It makes a mockery of the system. There should be a rule change or at least an agreement among all of the teams to prohibit this behavior.