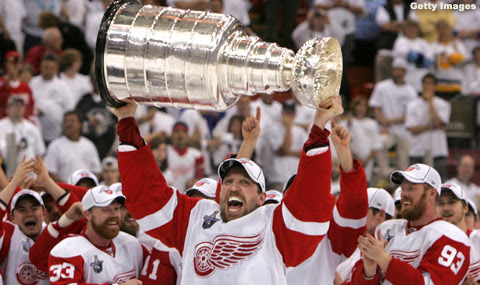 Wow.....suddenly it looks like there might not be enough time in one episode of Hockey Night on Long Island to cover all the exciting news going on in the world of hockey and the Islanders in just one sixty minute episode. Nonethelss, hosts Alex and Steve are going to give it a shot tomorrow, Saturday June 7, at 3:30 PM EST. The plethora of topics for the episode will definitley include a recap of Detroit's 2008 Stanley Cup victory, a look ahead to the NHL Awards, the NHL Draft, and free agency. In Isles' goaltending news, we'll talk about the latest Dubie Affair and another DP surgery. As if the topics alone aren't exciting enough, the dynamic duo of Alex and Steve are hoping to be joined by NHL.com Managing Editor, Shawn P. Roarke. Be sure to tune in to hear a real expert's thoughts on the Stanley Cup and some insight into the Islanders' plans for the draft and free agency. Like usual, you the listeners can talk to HNLI's hosts and special guest via phone, email, and with each other in the HNLI chatroom. So, be sure to tune in for what should be an epic episode of Hockey Night on Long Island....Saturday @ 3:30 PM EST.


UPDATE: We have received confirmation that Shawn P. Roarke will be the special guest for this episode. Be sure to call in during the show and ask Shawn questions about the New York Islanders.
Posted by Alex at 5:57 PM