Stanley Cup Update: Wings look To Wrap it Up 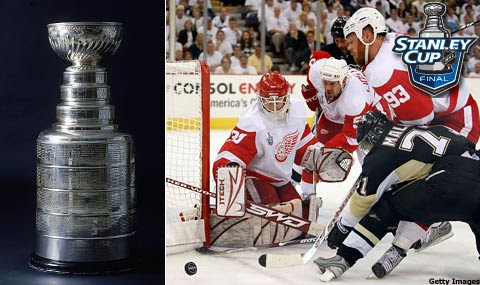 Despite valiant efforts in games 3 and 4 in Pittsubrgh, the Penguins managed to win only one of their first two games at home and have given the Detroit Red Wings the chance to end the series early in front of the home crowd in HockeyTown USA. The two teams will face off with Lord Stanley's cup in the building tonight at 8 PM EST on NBC.

The Red Wings seem to have all the momentum going into tonight's game after a 2-1victory in a very competitive game 4 at the Igloo. Despite losing the offensive firepower of Tomas Holmstrom, the Wings managed to maintain their style of play by emphasizing strong forechecking and depending even more heavily on a very experienced defensive unit. When called upon, former Isles netminder Chris Osgood stopped just about everything that came his way. With this efficient system in place, the Wings managed to get the goals they needed from Captain Niklas Lidstrom, who tonight could become the first European captain to win the Stanley Cup, and Jiri Hudler. Sidney Crosby and the Pens will need a big bounce-back effort tonight at Joe Louis in order to bring the series back to Pittsburgh.

Be sure to tune in on NBC for tonight's game 5, to keep on checking hockeynightonlongisland.com, and to tune into this weekend's episode of Hockey Night on Long Island this Saturday at 3:30 PM EST.
Posted by Alex at 3:09 PM